As both of my daughters are now in their first year of college and having a Ph.D. in Chemistry, there is an assumption that you can be a helpful resource with basic chemistry. (For the record, this is not a safe assumption.)

In my efforts to be helpful, I pulled out my first-year Chemistry text. In the spring of 1987 I was completing my second semester of Chemistry, and as I reviewed the old class syllabus, I noticed that Environmental Chemistry was one of the chapters covered. In thinking about the course, I specifically remember Professor John Hubbard making the analogy that the environment was like a buffer. I don’t recall the particular system, but the analogy applies to both the atmosphere and oceans.

A single section of the chapter discussed the topics of acid rain, photochemical smog, carbon monoxide, and climate. Within this text, a single paragraph summarized the role of carbon dioxide and its role in maintaining surface temperatures. Within this one paragraph, there was the warning “If the calculated effect of doubling of CO2 level on the surface temperature is correct, this means that the earth’s temperature will be 3 degrees C higher within 70 years.” (Chemistry: The Central Science, T. Brown and H.E. LeMay, Jr., 3rd ed., Prentice-Hall, Englewood Cliffs, 1985, p. 393.) Current CO2 levels are 405 ppm (parts per million) compared to 330 ppm as referenced in the 1985 text.
(https://www.scientificamerican.com/article/atmospheric-carbon-dioxide-hits-record-levels/) A 23% increase.

I was curious… can I see this prediction in data from my home locale of Salt Lake City, Utah?

I pulled a simple data set from NOAA’s website–annual averages from 1948 through 2016. Here are the data and a simple analysis.

So what does this mean? If we look at temperatures from 2012 through 2016, they all fall inside the 95% prediction intervals. So, no problem! (Right?)

But go back to the initial premise that the atmosphere is a buffer, when will we know that we’ve exceeded the “buffer capacity” for CO2? 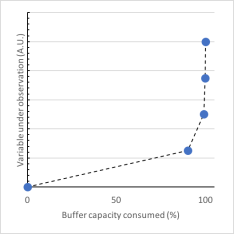 An example of a buffer curve showing the variable
under observation versus percent completion.

And that’s the problem, we don’t know how much of the buffering capacity we’ve consumed, and we probably won’t know where we are on the curve until after we’ve reached a tipping point, and temperatures accelerate beyond the slow, apparently linear trend we observe today.